In a previous blog I wrote about my discovery of Celebrate the Children while giving an invited plenary lecture at the Profectum Conference in New York City in October.  In chatting with Lisa and Lauren, two of the School’s presenters at the Conference, we agreed that the uniqueness of their DIR/Floortime approach to education warranted a visit and yesterday I had the privilege of touring the school together with our optometric staff.  CTC encompasses children with a wide array of developmental issues and alternative learning styles, and they have been widely recognized for their innovative approach to helping children on the Autistic Spectrum learn and thrive (as featured in a Time Magazine cover article).  This YouTube video clip of Brady Rymer, a special musician who’s kind of a cross between John Ritter and John Denver, epitomizes the warmth and inclusiveness of CTC’s approach.

I want to share with you a special interaction that I had with one of Lisa’s students, a young man named Christian.  The children at CTC are used to visitors spending time observing, but understandably some of the students are self-conscious about how their performance is being studied or judged.  Lisa advised us that this would be the case with Christian, a nonverbal child who would take time to warm up to an outsider like me poking his head in. 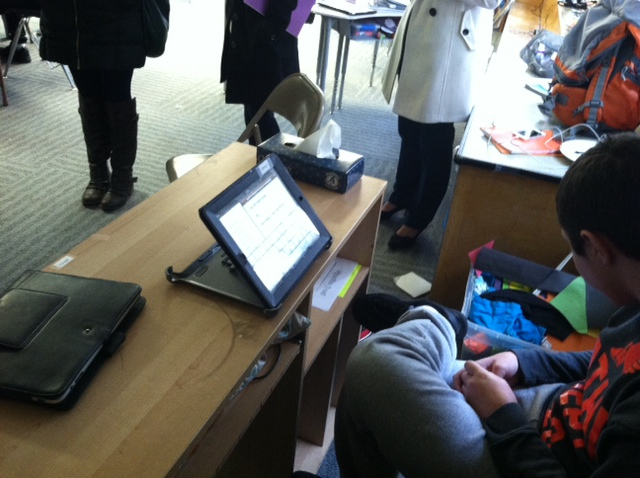 Lisa specializes in augmentative communication, and tablets such as the one Christian uses have been a technological godsend.  The key to note is that Lisa exercises some restraint on his arm as well as support, pulling back his arm so that he can re-touch each letter to type his responses to questions or share his own thoughts.  For example, he typed: “I am very smart I always pay attention but I can’t sho you”. 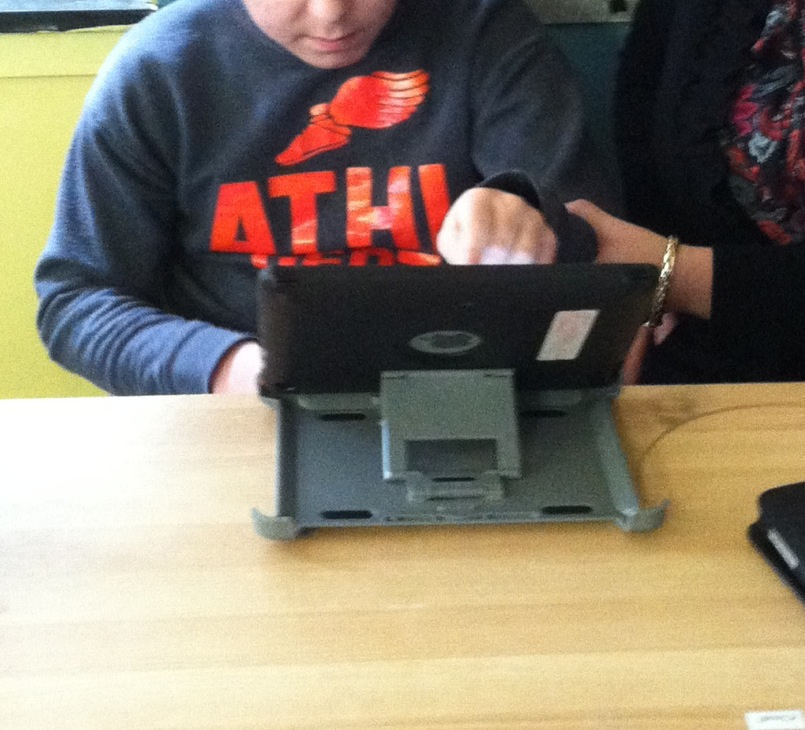 It is crucial to note that Lisa is not making the response for Christian, but facilitating his own guided eye-hand coordination.  In discussing with our staff how classic Christian’s body posture and head position was, largely using peripheral fleeting glances rather than sustained central or straight-ahead looking, we agreed that the least effective way to encourage children on the Spectrum to make eye contact or look centrally is to cue them to “look at me”, or “look here”.  For many of the children it’s too intense, representing a type of visual sensory overload, while for others it may be a way of driving visual sensory seeking behavior since the periphery is primed for motion and change.  As much as I’ve lectured about this, it struck me that so much of CTCs approach hinged on interactions within a structured range of near space for understandable reasons in terms of touch and movement so integral to the visual spatial features of the DIR/Flootrime model.  I wondered how well Christian might be able to process features at a distance, and transfer that information from distance to his tablet at near. 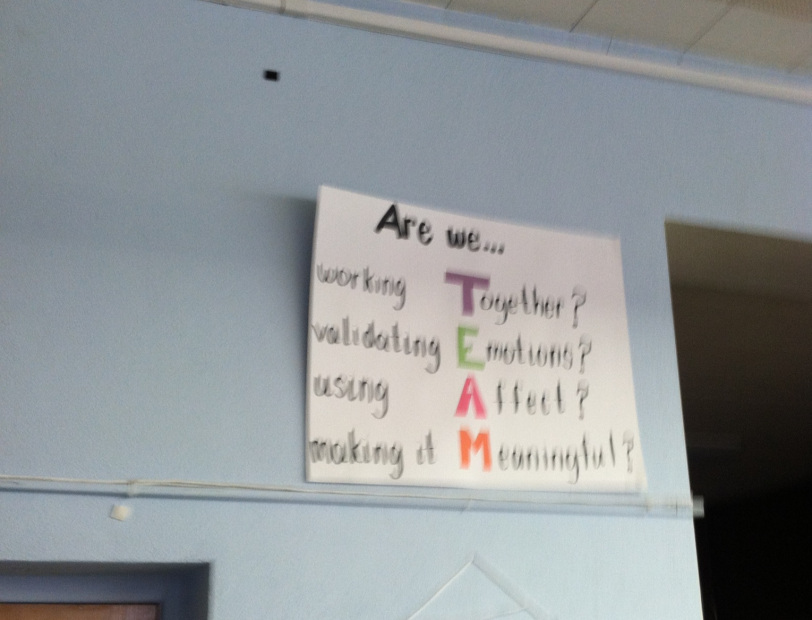 Directly beyond the table at which he was working, overhead and across the room, was a poster that had the capital letters T-E-A-M as pictured above.  I asked Lisa if she thought that Christian would be able to type just the letters that were in color.  He glanced across the room for what seemed like a split second, and typed “team”.  I then asked Christian, whose receptive language abilities were keen, to indicate for me what color the letter “E” was and he correctly typed “green”.  Although there is ample evidence that many children on the Spectrum can do a visual search with faster processing speed than you or me, until seeing Christian in action I hadn’t much thought about the correct metaphor for this.  Although the eye is much more than a camera, a reasonable analogy would be to say that Christian has an incredibly fast shutter speed and can capture things in a fleeting glance that would elude us.  This would certainly be consistent with the properties of peripheral vision and how many children with ASD seem to operate.  If that were the case, it could well be that a type of photographic memory is honed.  Perhaps more importantly, it’s incumbent upon us to understand that this alternative visual style may be a type of cognitive style best suited to the way such children with ASD process information. 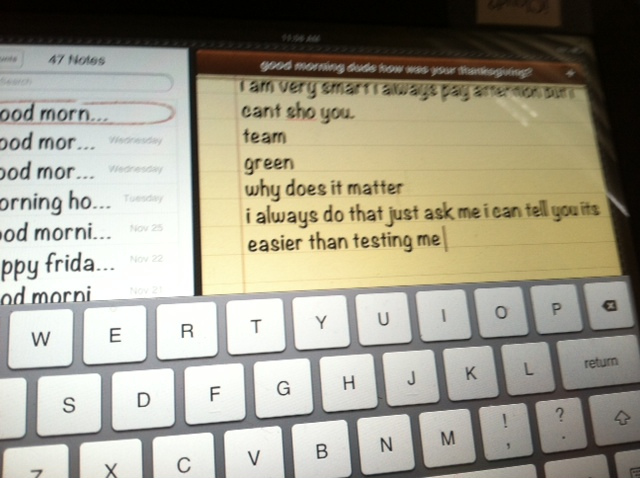 Now here is the part that touched me deeply.  Christian typed: “why does it matter i always do that just ask me i can tell you its easier than testing me”.  This kid is brimming with intelligence, always pays attention, and found a way to show it to me in a relatively brief exchange.  While I realize that Temple Grandin and others have championed the idea that although individuals with ASD can communicate alot to you about how they see if you know the right conditions to arrange and questions to ask, Christian gave me an unsubtle yet welcome reminder.  He let Lisa know that he liked me, but had to get used to me.  I typed back that I liked him too.

If my speculations are correct, it fits in with Brady Rymer’s theme – to paraphrase – that our job is to capitalize on this visual strength, not necessarily to change it.  I do believe however that we’ve just begun to scratch the surface in understanding how and why children with ASD have essentially a selective inattention to the central field, biasing input from the periphery.  It is another example of an alternative neurotypical style, one that we may attempt to integrate with central visual fixation or engagement but in a way that is not too disruptive.  I sense a part two coming on …