Visual tracking problems and silent concussions- WHY parents, the public and Optometrists need to know

When you have a healthy, bright child with a normal medical history presenting with a pattern of school performance spiraling downward in reading fluency and a recently diagnosed condition of oculomotor dysfunction in visual tracking, you want to have a reasonable explanation…why?

Based on our current understanding of the visual brain, my explanation to parents whose healthy child has recently been diagnosed with an oculomotor dysfunction is that this condition is usually developmental in nature. This means there is typically  a hereditay connection;  which is to say, if mom or dad or a close relative had similar problems then the child was genetically predisposed and more at risk of succumbing to these delays as well.

But this is an assumption based on accurate patient history. As a matter of fact, research has shown that a neurological event, concussive brain injury  will cause the same oculomotor dysfunction that we find in children with the developmental form of visual tracking problems. Yet, our experience shows when a parent knows that their child suffered a concussion, they are much more proactive from the beginning because they have been plugged into the rehabilitation system. However, what if a child were to suffer a serious bump on the head on the playground or fell on their bike, but they didn’t report the incident to their parents? Or sometimes the parent may even be aware of the incident, however thought that their child just got their “bell rung” and no further action is taken. The child may have subsequent headaches, feel ill, and experience other symptomscaused by a so-called “silent concussion” and assumed that  they had the flu, so nothing more is done. The absence of knowing about a concussive injury can lead to significant mismanagement of the child’s health care!

According to the Center for Disease Control and Prevention (CDC), there are 3.6 – 3.8 million reported mild traumatic brain injuries occuring annually in the United States. Many of them are sports and recreation-related, and more than 800 000 Americans seek outpatient care for this injury each year.

The fact that there are 3.8 million known mild traumatic brain injuries each year is because

those are the ones reported. But what about the number of concussive injuries that occur each year that go unreported, yet result in serious potential long term consequences. This is such a concern and large public health issue that the CDC has created important resources for physicians to heighten better awareness. Physician awareness is an important first step. But, besides symptoms, what else can be done to identify if a child who has suffered a concussion? Is there a way to be more proactive so that a child who suffered a concussion will not have to endure a senseless struggle because their condition wasn’t recognized soon enough?

Indeed, what if doctors and patients had a rapid, easy to administer, low cost test that was highly accurate for concussions?  From a preventative care model, wouldn’t it make sense to implement this on every child old enough to take the test for baseline purposes? In fact we have such a test available and it is called the King-Devick Test. It can be administered in less than 2 minutes and has been in use for over 3 decades in the optometric specialty of developmental vision and rehabilitation  to measure visual tracking and reading fluency problems. But now the King-Devick Test is becoming an important test for sports programs to rule out concussions because of it’s reliability identifying the player who has incurred a concussion. As is shown by a recent study by Mayo Clinic, and described in this video by Amaal Starling, MD and neurologist at Mayo Clinic, the King-Devick Test was shown to be 100% accurate in detecting a concussive brain injury!

Therefore, knowing that concussions can be identified 100% of the time with the King-Devick Test, here is another question for parents and the public to ask. Why are we not routinely administering the King-Devick Testing on children, 6 years and older, so that their optometric record establishes baseline in saccadic eye movement?  By having the King-Devick baseline testing, whenever a child presents with headaches, flu-like symptoms or  issues with reading fluency, the test could be readministered to determine if there is a decrease in ability consistent with a concussion. 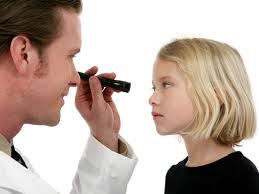 Furthermore, since all Doctors of Optometry have been trained in testing saccadic eye movement, we believe that the King-Devick Test should be an adjunct to every child’s primary eye examination record. For the same reason that every optometrist does baseline measurements in “eye-pressure” (intraocular pressures) to detect glaucoma and baseline visual fields to detect any neurological problems in the visual pathway, the King-Devick Testof saccadic eye movement is an evidence-based and reliable baseline test to detect potential  future concussions.

As the primary eye care profession, we encourage all optometrists to help be a part of the solution for early detection of “silent concussions” by prescribing baseline saccadic eye movement testing on all patients 6 years and older. Since early detection of concussion is critical to a patient’s neurological health, the CDC has started the Heads Up to Brain Injury Awareness Campaign and Facebook page. This public awareness programs shows how  those who have had a concussion are much more at risk of second impact syndrome  as well as many other serious problems.

For our optometric colleagues, by choosing to add this  2-3 minute test to your patient’s examination data, you are playing an important role within the multidisciplinary healthcare team to help identify “silent concussions” and insure that a child receives appropriate medical and developmental vision and rehabilitation care, when needed. More importantly, you could be saving a child’s life!

So now the final question is…why not?!