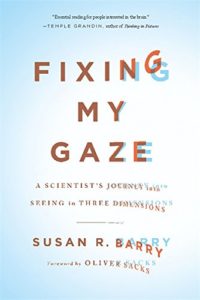 The June 19, 2006 issue of the The New Yorker magazine features a story about vision therapy. It is a notable story on many levels, perhaps the most notable aspect in that it was written by Oliver Sacks, M.D.

Dr. Sacks is a world-renowned neurologist, and you may be more familiar with him through a book that he wrote entitled “Awakenings”. It was a classic account of survivors of encephalitic lethargy in an institutional home, and their return to the world after decades of “sleep.” This book was the inspiration for the 1990 film of the same name, starring Robert De Niro and Robin Williams, as Dr. Sacks.

How did Oliver come to write about vision therapy? Sue Barry is a neurobiologist who teaches at Mt. Holyoke in Massachusetts. She had three eye muscle surgeries as a child, and through the years had been told that her vision was fine, and she was in no need for further treatment. Oliver is a fan of space travel, and he was chatting with Sue at a pre-launch party for her husband, an astronaut, in 1996. They struck up a conversation about her visual world, and left it at that.

But a few years ago, Sue began to experience instability in her vision. This was much more than a forty-something need for reading glasses. Determined not to accept that there was nothing further that could be done, she found her way to Dr. Theresa Ruggiero, a developmental optometrist in her area. Sue worked very diligently in vision therapy and was not only able to stabilize her vision but, for the first time, appreciate depth perception.

It was a profound revelation to her, and she wrote to Dr. Sacks. Moreover, she visited with David Hubel, co-recipient of the Nobel Prize in Medicine and Physiology. Dr. Hubel concurred that Sue’s experiences put a spotlight on the fact that older children and adults probably have greater abilities to respond to vision therapy than doctors have generally given them credit for. The “critical period” after which children cannot be helped through vision therapy holds true only for extreme cases of deprivation, such as children born with cataracts who are treated too late.

There is a very good chance that the interest shown by Drs. Sacks and Hubel in Sue’s case will result in “Awakenings” about the application of optometric vision therapy for patients of all ages in the neuroscience and medical communities.

The complete citation for this article is: “A Neurologists’s Notebook. Stereo Sue: Why Two Eyes Are Better Than One.” By Oliver Sacks. The New Yorker, June 19, 2006.