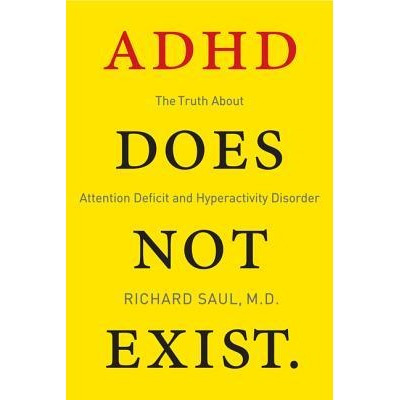 Notice the title of this book.  It’s emphatic.  It ends with a Period.  It is meant to be provocative.  Not provocative for the sake of provocation, its author Dr. Richard Saul notes, but because he is concerned about the multifaceted problems caused by the misdiagnosis of ADHD.

Richard Cushman Saul, M.D., is a behavioral neurologist who practices in Northbrook, Illinois.  In Part II of his new book he reviews the conditions and disorders responsible for ADHD symptoms.  The first one up?  Vision problems!  Dr. Saul begins each chapter with a boxed Big Point, and for the The Big Point about vision problems he writes:

“Problems related to vision are among the most overlooked explanations for attention-deficit/hyperactivity symptoms.  Children (and adults) who struggle to see normally are likely to demonstrate short attention span and distractibility that may be mistaken as symptoms of ADHD.  Steps taken to address the vision problem should resolve the attention/nyperactivity symptoms.”

Dr Saul proceeds to explain that undiagnosed vision problems can cause problems well beyond those related to eyesight.  He cites three articles from Optometry, the Journal of the American Optometric Association, two by Maples and colleagues and one by Borsting and colleagues that link behavioral concomitants of CI and ADHD.  He also imports information from the Children’s Vision Information Network.

We’ve devoted a significant amount of space to the subject of ADHD and its interrelationships with vision on our blog.  I want to highlight a few key thoughts.  Patricia Lemer, M.Ed., has pointed out the commonalities between signs and symptoms of vision problems and problems in attention.  Barry Tannen, O.D., FCOVD, has summarized the work by Solan and others on the link between visual attention therapy and improved reading comprehension, and collaborated with Dr. Mark Mintz, a pediatric neurologist on the overlap between visual problems and ADHD.  A wealth information about vision and ADHD is available on vision help.com, and Dan Fortenbacher, O.D., FCOVD has helped raised awareness about this.  I’ve never been one to claim that all children considered to have ADHD have been misdiagnosed although certainly, as Damari and colleagues have pointed out, cases can be cited of children with vision problems who were misdiagnosed as having ADHD.

My personal comfort level is in educating parents and professionals that ADHD and Visual Abnormalities can co-exist, and share common symptoms even if the cause and effect may be speculative.  The association has been clearly made in convergence insufficiency.  Yet it’s refreshing in a way to hear a behavioral neurologist take the bold stance that vision problems are at the top of the list of conditions that can mimc or be misdiagnosed as ADHD.  A small subset of children with signs and symptoms of what is considered to be ADHD have neurochemical imbalances that really won’t respond to any other treatment as well as pharmaceuticals.  Yet for those children who are inattentive due to vision problems, visual inattention isn’t likely to resolve until the vision problems have been treated.

ADHD Does Not Exist is aimed toward parents and teachers, and may just seed a paradigm change if other pediatric neurologists and pediatricians heed Dr. Saul’s message.  It seems to be grabbing attention.